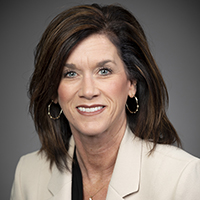 Tania joined DDOK in August of 1990, while she was a student at the University of Central Oklahoma. She has served our organization in numerous roles, including vice president of operations, before being promoted to her current position in 2017.

“It was a lucky day when we recruited Tania straight out of college. In the 30 years since, Tania has demonstrated her keen intellect, discipline and drive for perfection every single day. Her contributions have been key to DDOK’s growth and reputation for administrative and service excellence,” said President and CEO John Gladden.

Tania is responsible for direction and oversight of the Claims, Compliance and Governmental Affairs, Customer Service and Provider Relations departments. She also serves as DDOK’s Chief Privacy Officer.

“We all rely heavily upon her to manage her vast responsibilities with thoughtfulness, curiosity, grit and attention to detail. Tania never disappoints,” said Gladden.