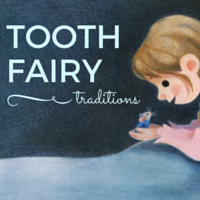 Your tooth is loose. So you connect a string from tooth to doorknob, slam the door and bam, it’s out. Now what? In the United States, the tooth goes under the pillow and a magical fairy flutters down at night and replaces the tooth with some major coinage (actually, $3.19, today’s average going rate for a tooth). But around the world, this story isn’t quite the same.
From magical fairies to thirsty mice, Tooth Fairy traditions around the world are as diverse as the people who celebrate them. Check out some of the more interesting ones below.

ARGENTINA
In Argentina, boys and girls leave baby teeth in a glass of water. While they sleep, a magical mouse named el Ratón Pérez takes the tooth, drinks the water and leaves the child a little treasure inside the empty glass. In Mexico, Peru and Chile, this little guy’s name is “el Ratón de los Dientes,” meaning “the Tooth Mouse.”

SOUTH AFRICA
There’s another little mouse that makes the rounds in South Africa. Children might leave their teeth under pillows there, but they also sometimes leave it in a slipper.

INDIA & JAPAN
In some Asian countries, when a child loses a tooth, they give it a toss. In India, they toss it onto the roof. In Japan, they throw it straight up into the air if it came from their upper jaw, and straight down if it came from their lower jaw. Why? To ensure their new adult teeth grow in as straight as possible.

CHILE & COSTA RICA
In Chile and Costa Rica, children usually give their pearly whites to their mothers, who then make pretty charms out of the teeth and return them to their kids.